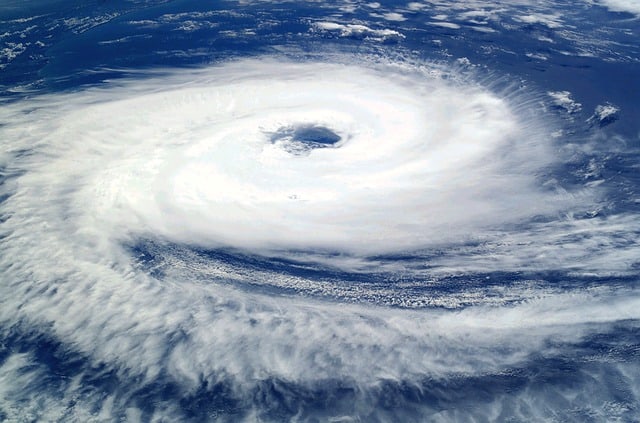 First conceived by Sir Francis Galton in the 1860s, anticyclones are, in some senses, the opposite of cyclones. Where cyclones are associated with the world’s great storms, anticyclones are the cause of bright, dry weather. An anticyclone is a center of high pressure and is the pressure analog to a topographic hill. On weather maps, the highest pressure in an anticyclone is labeled with an “H” and it is common for publicly presented maps to dispose of the isobars to concentrate on the “H.” There is no quantitative rule as to how high, absolutely or relatively, the pressure must be for an anticyclone to exist. It is sufficient that there are closed isobars that engender a circulation. Although anticyclones may be circular, they can take on all sorts of irregular shapes.

Air near Earth’s surface rearranges itself from the center of high pressure to the lower pressure on the fringes, but not directly. The Coriolis Effect and force of friction modify surface air from moving in the direction of the pressure gradient force. In the Northern Hemisphere, the flow is from the high to low pressure side of the isobars at an acute angle so as to set up a clockwise circulation. In the Southern Hemisphere, the opposite Coriolis Effect causes counterclockwise circulation. The air that leaves the anticyclone center lowers the center’s pressure and helps air to descend from the upper troposphere.

Anticyclones are stable as compared with their unstable cyclone counterparts. That is, anticyclonic systems invariably resist the rise of air from Earth’s surface so as to inhibit cloud development and production of precipitation.  Precipitation can occur when the air is stable, but the precipitation will tend to be light because of the relative lack of uplift and the lack of moisture.

The strongest incarnations of anticyclones are those that build up in the Arctic, Antarctic, and Subarctic air mass source regions in the winter time and become Arctic, Antarctic, and Polar air masses. Over a course of weeks these air masses are generated and portions of the air masses break loose under the influence of the polar front jet stream to visit the middle latitudes and, occasionally, subtropical latitudes. Unlike cyclones that are associated with the mixing of two or more air masses, anticyclones are composed of single air masses. Their leading edges are cold fronts that usher in changes in wind direction, lower humidity, and colder temperatures. However, behind cold fronts are loosely spaced isobars of anticyclones making for light and variable winds. The calm and stable air near anticyclonic centers is quite dry, usually cloudless, and optimal for the nighttime loss of longwave radiation to space. The result is the coldest air experienced in the middle latitudes. Indeed, record cold middle latitude temperatures are usually associated with anticyclones. It might be thought that anticyclones are types of blizzards, but this is not so; the cold air at the front edge of the anticyclone helps to cause lift that might be associated with a blizzard by interacting with middle latitude cyclones. The cores of anticyclones are locations where precipitation is relatively unlikely.

The winter configurations of middle latitude cyclones and anticyclone are ordinarily geographically related. Cyclones are strung along the waves of the polar front (see Middle latitude cyclones). Following to the north and west of the cyclones are anticyclones that have edges circulating air into the cyclones and the fronts. Wintertime anticyclones can obtain immense proportions and are usually hundreds of thousands of square kilometers in size; at times they can stretch from Canada to Mexico. The pressures in winter anticyclones can sometimes pass 1050 mb and their centers travel at rates of about 50 kph.

The Siberian Express is, perhaps, the most nefarious incarnation of a middle latitude anticyclone. In the winter, the coldest air of the Northern Hemisphere including the North Polar Region is usually over Siberia. A large ridge in the polar front jet stream will move this air from eastern Siberia to the eastern United States in a matter of a few days. This fast-moving anticyclonic incursion is sometimes termed a cold wave and is responsible for several days of cold, if not low temperature, record-setting weather. The “Arctic Express” is a similar event when the anticyclonic air has origins in northwest Canada or northern Alaska; this “express” also barrels along but it does not tend to be as cold.

Winter anticyclones pass over warmer and warmer surfaces as they leave their source regions. Over a course of days, the anticyclone will moderate from its cold, dry origins. For instance, an anticyclone that started at −55°C in Siberia may modify up to 0°C by the time it reaches the Gulf of Mexico. This is not bitterly cold weather as when it was in Siberia, but is much colder than the winter averages over the Gulf.

Summer anticyclones are also noted for bright, dry weather with minimal winds. In summer, the central pressure in a strong anticyclone may only be around 1,000 mb. In the middle latitudes these set up when the polar front jet stream is far poleward and there are no strong winds directly aloft and anticyclones languish and can become stationary. Such a pattern becomes hotter and drier with time and is strongly associated with heat waves and droughts.

In the subtropical regions are the semi-permanent anticyclones. These are known as the subtropical highs within the global circulation. Air in the Hadley circulation leaves the equatorial region at high altitudes in the troposphere and sinks as it moves poleward. This descending air is profoundly important to world climates because it causes the annual and seasonal dryness experienced in tropical and subtropical latitudes. Even though the near-surface air is very hot, its propensity to rise is countered by the strong descent of air from aloft. When the subtropical high is overhead of a region there is usually a paucity of precipitation. Indeed, the presence of the Sahara, Australian deserts, the Atacama, and the Kalahari share the common characteristic of the year-round presence of subtropical highs. Adjoining regions are not as dry because the subtropical highs are not entrenched throughout the year.

Ironically, the presence of light, diverging anticyclonic flow in the upper troposphere can have a profound effect on the formation of hurricanes. Hurricanes are cyclonic storms built from the warm sea upward. To develop, the vertical change of wind speed and direction with height (wind shear) must be minimal. Jet streams and other fast winds aloft literally break the top off of a developing hurricane. The winds of upper anticyclones provide minimal wind shear and the divergence provides outward evacuation of the air rising from the surface and helps to deepen the surface low and increase hurricane wind speeds.