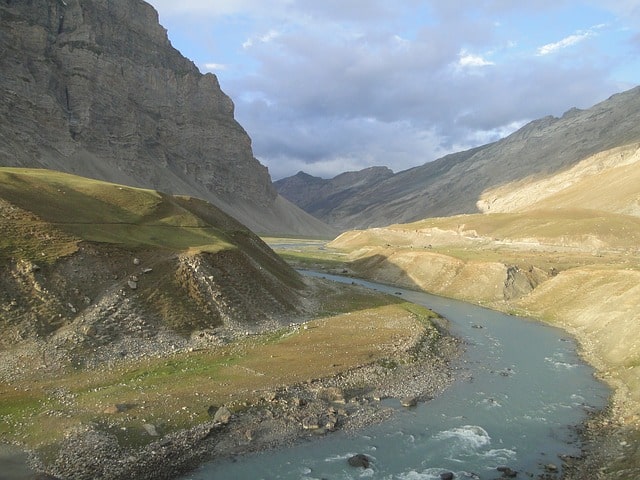 Indus river is the longest and most important river in Pakistan and one of the most important rivers on the Indian subcontinent. Originating in the Tibetan plateau in the vicinity of Lake Mansarovar, the river runs a course through in Jammu and Kashmir and Northern Areas, flowing through the North in a southernly direction along the entire length of country, to merge into the Arabian Sea near Pakistan’s port city Karachi. The total length of the river is 3200 km (1988 miles). The river has a total drainage area exceeding 450,000 square miles. The river’s estimated annual flow stands at around 207 cubic kilometres. Beginning at the heights of the world with glaciers, the river feeds the ecosystem of temperate forests, plains and arid countryside. Together with the rivers Chenab, Ravi, Sutlej, Jhelum, Beas and the extinct Sarasvati River, the Indus forms the Sapta Sindhu (“Seven Rivers”) delta in the Sindh province of Pakistan. It has 20 major tributaries.

The Indus provides the key water resources for the economy of Pakistan – especially the breadbasket of Punjab province, which accounts for most of the nation’s agricultural production, and Sindh. It also supports many heavy industries and provides the main supply of potable water in Pakistan.

The ultimate source of the Indus is in Tibet; it begins at the confluence of the Sengge and Gar rivers that drain the Nganglong Kangri and Gangdise Shan mountain ranges. The Indus then flows northwest through Ladakh-Baltistan intoGilgit, just south of the Karakoram range. The Shyok, Shigar and Gilgit streams carry glacieral waters into the main river. It gradually bends to the south, coming out of the hills between Peshawar and Rawalpindi. The Indus passes gigantic gorges (15,000-17,000 feet) near the Nanga Parbat massif It swiftly flows across Hazara, and is dammed at the Tarbela Reservoir. The Kabul River joins it near Attock. The remainder of its route to the sea is in plains of thePunjab and Sind, and the river becomes slow-flowing and highly braided. It is joined by Panjnad River at Mithankot. Beyond this confluence, the river, at one time, was named as Satnad River (sat = seven, nadi = river) as the river was now carrying the waters of Kabul River, Indus River and the five Punjab rivers. Passing by Jamshoro, it ends in a large delta to the east of Thatta.

COUNTRIES AND ITS INDEPENDENCE DA

The Indus is one of the few rivers in the world that exhibit a tidal bore. The Indus system is largely fed by the snows and glaciers of the Karakoram, Hindu Kush and Himalayan ranges of Tibet, Kashmir and Northern Areas of Pakistan. The flow of the river is also determined by the seasons – it diminishes greatly in the winter, while flooding its banks in the monsoon months from July to September. There is also evidence of a steady shift in the course of the river since prehistoric times – it deviated westwards from flowing into the Rann of Kutch. It is the Official and National River of Pakistan in Urdu as Qaumi Daryaa and Sindhi it is called Daryaa Badshah, The King River.

Paleolithic sites have been discovered in Pothohar, with the stone tools of the Soan Culture. In ancient Gandhara, evidence of cave dwellers dated 15,000 years ago has been discovered at Mardan.

The major cities of the Indus Valley Civilization (IVC), such as Harappa and Mohenjo Daro, date back to around 3300 BC, and represent some of the largest human habitations of the ancient world. The IVC was extended fromBalochistan to Gujarat, with an upward reach to the darcon from east of River Jhelum to Rupar on the upper Sutlej. The coast settlements extended from Sutkagan Dor at Iranian border to Lothal in Gujarat. There is an Indus site on theOxus river at Shortughai in northern Afghanistan (Kenoyer 1998:96), and the Indus site Alamgirpur at the Hindon river is located only 28 km from Delhi. To date, over 1,052 cities and settlements have been found, mainly in the general region of the Ghaggar-Hakra River and its tributaries. Among the settlements were the major urban centers of Harappa and Mohenjo-daro, as well as Lothal, Dholavira, Ganeriwala, and Rakhigarhi. Only 90 to 96 of the over 800 known Indus Valley sites have been discovered on the Indus and its tributaries. The Sutlej, now a tributary of the Indus, in Harappan times flowed into the Ghaggar-Hakra River, in the watershed of which were more Harappan sites than along the Indus.

Some scholars believe that settlements of Gandhara grave culture of the early Indo-Aryans flourished in Gandhara from 1700 to 600 BCE, when Mohenjo Daro and Harappa had already been abandoned. However many modern researchers believe that the IVC was indeed an Aryan civilization. Researchers such as professor Egbert Richter Ushanas concerning the IVC seals has said, “All the seals are based on Vedas — Rig Veda and Atharva Veda.” The nameIndus is a Latinization of Hindu, in turn the Iranian variant of Sindhu, the name of the Indus in the Rigveda. Sanskrit sindhu generically means “river, stream”, probably from a root sidh “to go, move”; sindhu is attested 176 times in the Rigveda, 95 times in the plural, more often used in the generic meaning. Already in the Rigveda, notably in the later hymns, the meaning of the word is narrowed to refer to the Indus River in particular, for example in the list of rivers of the Nadistuti sukta. This resulted in the anomaly of a river with masculine gender: all other Rigvedic rivers are female, not just grammatically, being imagined as goddesses and compared to cows and mares yielding milk and butter.

The Indus has formed a natural boundary between the Indian hinterland and its frontier with Afghanistan and Iran. It has been crossed by the armies of Alexander the Great – Greek forces retreated along the southern course of the river at the end of the Indian campaign. The Indus plains have also been under the domination of the Persian Empire and the Kushan Empire. The Muslim armies of Muhammad bin Qasim, Mahmud of Ghazni and Babur also crossed the river to strike into the inner regions of Gujarat, Punjab and Rajputana.