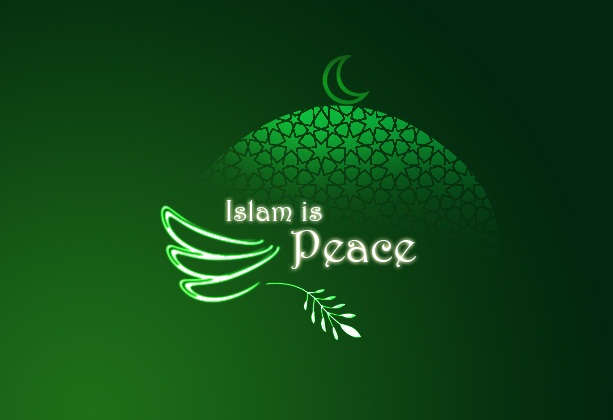 Islam is a religion of peace and security, Islam is peace, and it urges others to follow the path of peace and protection. The most major proof of this is that God has named it as Islam.’ The word Islam is derived from the Arabic word Salama or Salima. It means peace, security, safety, and protection. As for its exact meaning, Islam means absolute peace. As a religion, it is peace incarnate. It encourages humanity to be moderate, peaceful, kind, balanced, tolerant, patient, and forbearing. If we look for the meaning of a Muslim or mu’min (believer) mentioned in the Qur’an and hadith, it will become evident that, in the sight of God and His Messenger, a Muslim is someone who represents peace and security, and a mu’min is the one who is gifted with love, regard, peace, tranquility, tolerance, and coexistence, and supports the cause of human dignity. Everyone is protected and safe from him at all levels, alone and together. (ISLAM IS PEACE & SECURITY)

THE THREE LEVIES OF ISLAM

It is reported that ‘Umar b. al-Khattab said:
‘One day as we were sitting with the Messenger of God ﷺ, there appeared before us a man whose clothes were exceedingly white and whose hair was exceedingly black. No signs of travel were seen upon him and none of us knew him. He walked up and sat down by the Prophet ﷺ resting his knees against his and placing the palms of his hands on his thighs, he said, “O Muhammad! Tell me about Islam”. The Messenger said, “Islam is to bear witness that there is no god but God, and that Muhammad is the Messenger of God, and to perform the prayers, to give the alms, to fast in Ramadan and to make the pilgrimage to the House [the Ka’ba in Mecca] if you are able”. The man said, “You have spoken truthfully”. We were amazed at him for asking the Prophet a question and then saying that he had spoken truthfully. Then he said, “Then tell me about Iman”. The Messenger ﷺ said, “Iman is to believe in God, His Angels, His Books, His Messengers, and the Last Day and to believe in Divine destiny, both its good and evil”. He said, “You have spoken truthfully”. Then he said, “Tell me about Ihsan”. The Messenger ﷺ said, “It is to worship God as though you see Him, and if you don’t see Him, know that He sees you”. He said, “So tell me about the Final Hour”. The Messenger ﷺ said, “The one asked about it knows no better than the one asking”. He said, “So tell me about its signs”. The Messenger ﷺ said, “That the slave-girl will give birth to her mistress and that you will see the barefooted, naked and destitute herdsmen competing in the construction of tall buildings”. Then the man left and I stayed for a time. The Prophet ﷺ then said, “O ‘Umar! Do you know who the questioner was?” I said, “God and His Messenger know best”. He ﷺ said, “It was Gabriel, who came to you to teach you your religion”.

Replying to Angel Gabriel’s question about Islam, the Prophet ﷺ defined the basic practices of Islam; when asked about Iman, He ﷺ described the basic beliefs of belief in the din; and when asked about lhsan, He ﷺ defined the inner states of the heart and the spiritual experiences pertaining to the which bring about the purification of the inner self, spiritual elevation and stability, and strength in personality and character. The facts of these three levels of the din have been elucidated in a number of hadith reports. Similarly, God Most High revealed.

Details about these levels on different occasions in the Qur’an. As for the first level, God says:

Regarding the second level, God says:

‘The Bedouins say, “We have believed”. Say, “You have not believed. Rather say, “We have accepted Islam for true belief has not yet entered your hearts”

And regarding the third level, God says:

‘And with regard to din, who can be better than he who submits his whole being entirely to God while he also observes spiritual excellence”

Elsewhere in the Qur’an, God Most High mentions these three levels together. He says:

‘There is no sin on those who believe [have Iman] and do righteous deeds with regard to what they have eaten [of the unlawful things before the prohibitions came] so long as they observed piety and possessed firm faith and practised pious deeds consistently, and later, [after the revelation of the prohibitions] they desisted from [unlawful things] and believed [with certainty regarding their unlawfulness], became people of piety and [finally] rose to the station of those of spiritual excellence [lhsan]. And God loves those who observe spiritual excellence’.

General Meaning of the word Islam

If we study the general meaning of the word Islam, we see that it refers to the din as an entire; however, if we reflect on a specific meaning of the word, we see that it denotes the basic— although significant—practices known as the ‘pillars of Islam’. It is these pillars that shape the Muslim’s individual and collective life into a practical mold. In the same way, the educations of the religion that pertain to actions and commands fall under Islam. However, the educations that pertain to beliefs and doctrine fall under Iman. They describe the scriptural aspect of human life. Accordingly, the educations of Islam bless us with lofty inner feelings of connection to God, and the spiritual states of heart converge on the third level of Ihsan. These teachings purify Muslims morally and spiritually. The mu’min’s heart and inner self is developed and elevated, which is the main objective of Islam and Iman. (ISLAM IS PEACE & SECURITY)